I am a very sentimental person, and because of this, I spend an awful lot of time thinking about the past.

Yes, at 20 years old, one of the scariest things I can do is think about being in high school. And yet, lately, I have found myself thinking a lot about that, and who I was back then.

And, of course, that means thinking about all the musicals I used to listen that I haven’t touched in years. So I thought I would make a blog series where I revisited my old favorites.

The first one I decided on was Broadway’s “American Idiot“. 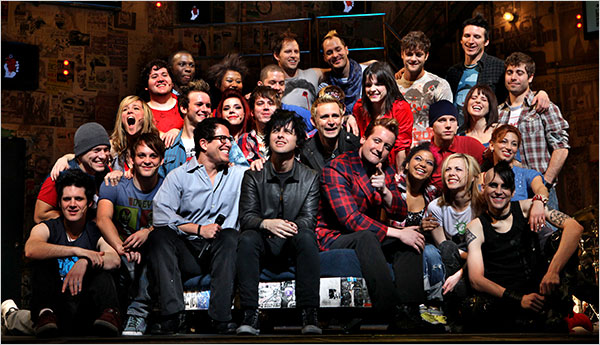 I was so obsessed with this in high school. A good friend of mine and I used to listen to it all the time and talk about it every day. Also, it was so popular on Tumblr back in 2013. Even so, I hadn’t listened to it in years.

“American Idiot” (the musical) is of coursed based off of Green Day’s conceptual punk opera album “American Idiot”. The original album, by the way, is probably one of the greatest albums of all time. It’s absolutely a masterpiece. The musical follows three young friends trying to find meaning in their lives. It’s the perfect musical for disillusioned millennials, or any Green Day fan, which I would hope is most people.

This show is just so special to me. It’s not the most amazing show ever, but it holds a special place in my heart. It has a message that I think a lot of people can relate to today. Especially people my age. We all feel disillusioned and confused about the state of the world, and a lot of us are angry about that as well. (Also, related, for some reason Trump was there? But Billie’s response was everything)

When I listened to this for the first time in ages just the other day, I felt so happy and emotional. I still remembered all the words to all my favorite songs. (Which are, BTW, “Favorite Son”, “Last of the American Girls/She’s a Rebel”, “Too Much Too Soon” and “Homecoming” but specifically “The Death of St. Jimmy”) And as I sat in my car crying as I listened to Tony Vincent singing some of my favorite lines – “Jimmy died today / He blew his brains out into the bay / In the state of mind / In my own private suicide” – I remembered why I fell in love with such an unconventional musical in the first place. Because I feel it deep in my heart.

DOES IT HOLD UP?: Heck yeah it does!

(Also, Theo Stockman will always be the OG bae, thnx)